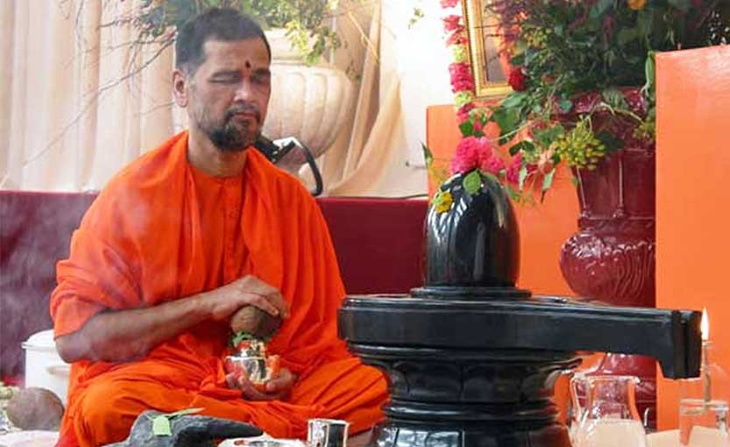 Sri Gopala Krishna Swamy, in the early years was introduced to the preachings of Sri Swamy Shivananda of Hrishikesh by his maternal uncle Sri Vaikunta Madhyashta. Sri Madhyastha himself was a celibate all his life and was associated with Shankar Math in Kalady, Kerala. Young Gopala took to heart the preachings of Sri Swamy Shivananda and importance of celibacy and purity of thoughts and action.

Based on instructions from Sri Prabhudhanada, young Gopala started reading Bhagawad Geeta, Ramayana and recitation of Sri Vishnu Sahasranama and Sri Lalitha Sahasranama. This association between the guide and the keen learner blossomed over the years and Sri Gopala Baba was identified as a Sadhaka, eligible for Sanyasa Deeksha with Sri Prabhudhananda Saraswathi as the given name.

Sri Gopala Baba, while he was going to Ramakrishna Ashram and doing his Sadhana, used to notice a framed photo of Bhagawan Sri Sathya Sai Baba in the pooja room at their home. Till then he had only heard from his parents that Bhagwan stayed in the neighbouring state of Andhra Pradesh and was considered a divine being.

One day, Sri Gopala Baba was cleaning the pooja room and removed the photo of Bhagawan Sri Sathya Sai Baba from the pooja room as he felt it was old. Smt. Yamunamma found the photo missing the next day and was frantically searching and asking everyone for the whereabouts of the photo. Young Gopala coolly replied that he threw it away as it was very old! What he saw next changed his approach of spiritual sadhana and brought him close to Bhagawan Baba. Smt. Yamunamma had tears in her eyes and ran out to the dust bin to get the photo back and said it is Bhagawan Baba, not a photo!!

Sri Gopala Baba took to Sagunopasana and started worshiping God in this physical form of Bhagwan!! We have seen how intense his love for Bhagawan was, the decoration, the food offered, the care taken in pooja, the offerings made to Bhagawan and the attention to detail!!

This incident kindled the attraction to Bhagawan Sri Sathya Sai Baba and his parents took young Gopala to Puttaparthi, to his Mother Sri Sai Kamakshi. The love story started!! Sri Gopala Baba said, what is in the physical plane is Sri Sai Kamakshi alone, what is beyond, is also her, so attention to detail is required. He also used to worship his own photo and informed his devotees that Bhagawan Baba and Sri Ramakrishna Paramahamsa also did the same and it is referred as ‘Satswarupa Darshana’ – seeing oneself as divine.