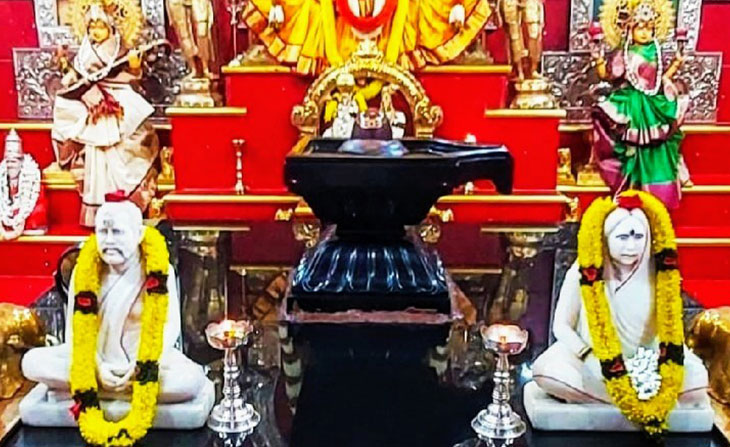 All His devotees, the world over were informed about Gopala Baba’s Maha Samadhi. On the next day, 12th June 2020 , the Samadhi rituals were performed with great devotion, at Sri Soma Sai Skanda Ashram, strictly following the instructions ordained by His Holiness himself to the devotees earlier on different occasions.All the materials, resources and pooja articles for this day of His Maha Samadhi, were arranged by Swamy Himself in sufficient quantities many years back and He had mentally trained His devotees on how to perform the Samadhi rituals.

He was seated on a wooden Simhasana (Throne) in Padmasanaa posture, robed in new clothes with His hands in Dhyana Mudra. Swamy was seated in the Palanquin and the Palanquin was taken around the Kamakshi Temple for 3 Pradakshinas. Thereafter, Palanquin entered the temple and Swamy was placed in the middle of the Hall for the final darshan. Swamy along with Simhasan was lowered in the Samadhi with ropes and were pulled off after the placement. Various items as per his instructions were placed inside the Samadhi Sthala. After that Vishesha Pooja was performed.

After the pooja was completed the large black granite stone was put on top of the Samadhi. The Shiva Lingam was kept on top of the Samadhi and Abhishekam and Aarathi performed. After the Aarathi, the Temple was kept open for the Darshan of Swamy, in the form of Shiva Linga for all His Devotees. With this the Mahasamadhi of Sri Sri Sri Prabhuddananda Saraswathi Maharajji, also fondly known the World over to His devotees as ‘Gopala Baba’ was concluded. 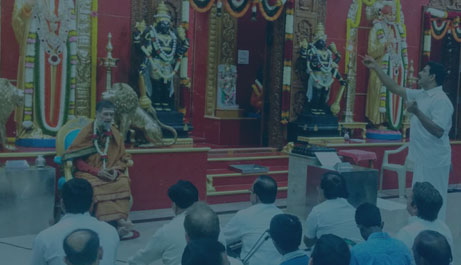